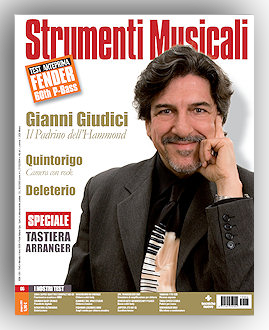 Gianni Giudici, over forty years as a Jazz musician, with a great symbiosis with all keyboard instruments, from the piano to the polyhedral world of the electronic musical instruments.

Besides being a talented composer, he is also billed as one of the best European performers on the Jazz organ, an instrument which he plays with a unique style and virtuosity, since (in the early seventies) he has been the youngest European official Hammond demonstrator and concert Artist. His first organ trio (when he was 17) included Tullio De Piscopo on drums and Bruno De Filippi on guitar and he was also co-founder of the Cooper Terry Blues Band, probably the best Italian blues band of that time.

During the years he played with all the best Italian jazz musicians, being one of the resident players of famous clubs as the Capolinea Jazz Club, Brera’s Club 2 and 17 Jazz Club of Milan, his town. During the last years the International Archive of Jazz Organ (IAJO – Koln) nominated him Organist of 2007. In June 2011 the famous Italian magazine Strumenti Musicali dedicated him the front cover page and a long interview, naming him “The Hammond Padrino“.

For over 35 years he has also been holding the position of Vice President and Musical Director of GENERALMUSIC and this unique position allowed him to enter the heart of sound synthesis techniques, diversifying between executive practices and musical instrument development with a versatility uncommon within the musical instrument field. Thanks to this experience, he also dedicated time for seminars on music and related technology, working in hi level research teams with the Centro di Sonologia Computazionale of the Padua University and other famous sound-research international teams, as the the Verona and Milan Universities.

He joined Fatar/Studiologic since 2010 as Brand Manager and Music Director and in this position he still dedicates his passion and long time experience to develope many successful products, working directly with the Ceo and a his smart R&D Team

The Music of Gianni Giudici has been published by Zanibon-RICORDI.

This site uses cookies, including third parties, in order to improve your experience and to provide services in line with your preferences. By closing this banner, scrolling this page or by clicking any of its elements consent to the use of cookies.OkRead more